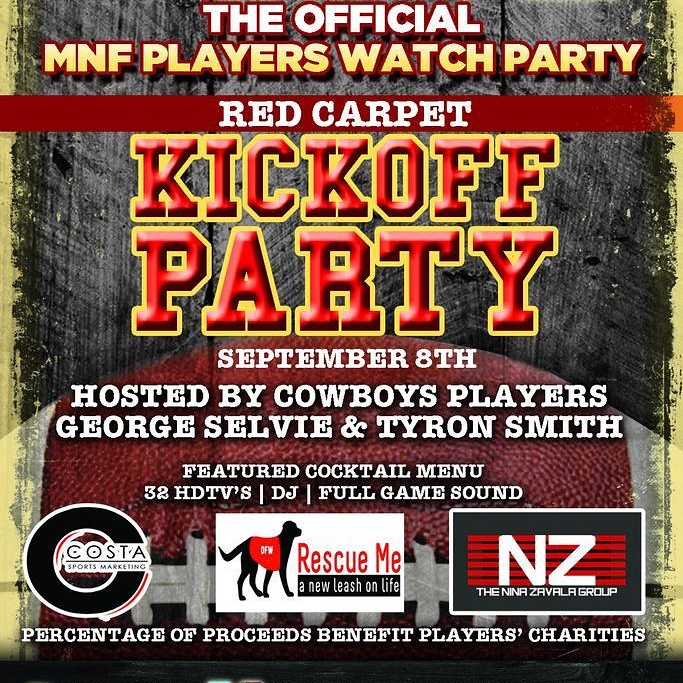 Dallas, TX. (August 22, 2014) – The Nina Zavala Group and Costa Sports Marketing bring you the Official Monday Night Football Players Watch Party at Henderson Tap House. The 2014 season event series kicks off September 8th with Pro-Bowl Left Tackle Tyron Smith and Defensive End George Selvie hosting the double-header red carpet kick-off at 6pm.
“HTH MNF” watch event has a much more contemporary concept where there is no hassle of an hour long radio or television show recording, two players will be on-site each week to simply enjoy themselves, fans, and do well for the community all at the same time. Henderson Tap House will also be donating a portion of proceeds each week to a different charity of the players’ choice. Week 1 recipient is DFW Rescue Me, a foster-based dog rescue in the Dallas Metroplex.

About DFW Rescue Me:
Rescue Me is a foster-based rescue group in the Dallas area. We are an all-volunteer 501c3 non-profit organization. It is the goal of DFW Rescue Me to have a positive impact on those statistics through adoption programs, teaching responsible pet ownership, and emphasizing the importance of spaying and neutering to control overpopulation.
Our mission is to provide a “new leash on life” by finding permanent and loving homes for lost, abused, and abandoned dogs.

For more information about the event, please visit www.hendersontaphouse.com or contact: